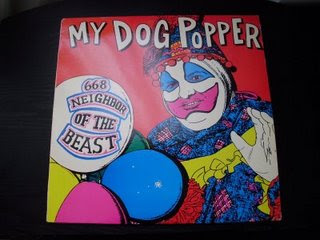 In the late eighties, My Dog Popper took a stand that not many others did. On "Honky Night In Canada", they said fuck you to the burgeoning commercial hip hop sound that would ultimately culminate with the likes MC Hammer and Vanilla Ice a few years later. And the crown jesters of Canadian punk had a good time doing it too.

This is another band that I heard first because of a mix tapes. Fuck, I miss the lost art of the mix tape. There were so many quandaries you had to face when making one: what song leads off, how you do finish side 1 as opposed to side 2, how many songs will you able to fit on either side. The list is endless. Now it seems like all you have to do is drag some songs over to some software and then you got a mix CD. Magic. No fuss, no worries. It’s all so mechanical, like counting beans. 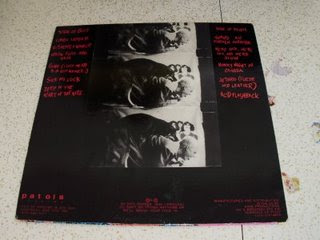 This record has some immortal moments, like the despairing (yes, despairing) “Gino (I Lost My Job to A Guy Named…)”. Regardless if someone named Gino ever jacked some work from you, I think we can all relate to the hopeless hilarity the singer feels. Listen to it and you’ll see what I mean. There’s real insight here too, like the line “666 equals 7-11”. My Dog Popper knew the deal. Wisdom on wax.

Download it now! My Dog Popper
Posted by AdamBomb at 12:54 PM

Awesome album.I've been waiting for some one to convert for a long time. I going to check out your other posts too.Thanks for putting that up.

My friend Darrin gave me My Dog Popper on cassette sometime in the 80's. I'm listening to Deep In The Heart of The Night for the first time since I was 19. Awesome. Thanks for posting--and thanks James Watson for posting this on facebook!

I just stumbled on this. I bought the cassette way back in the 80's
(like everyone else I guess) and my tape player ate it about 9 years ago.
Needless to say I couldn't find this anywhere.
I'm so fucking pumped. I cant wait to listen to this again.
Thanks a million for posting this man!

I'm glad that I can help. Enjoy the tunes!

Love this, I've been looking for it since this was a staple of my old college radio show "the bong show" back in the early 90's. having some problems with media fire tho... :(

Does it need to be reupped, Kevin?

Nah, it must have been a problem with my wireless, when I went to my wired desktop it downloaded just fine, listening to (listening to acid flashback as I type this). Thanks man, I've been looking for this for years.

Amazingly small world. I was just writing about when I wrote to John Peel about this band and he replied. I never did track down a copy, so this will do in the meantime! Thanks again.

Love this band..."lost My Job' is an all time favourite...anybody remeber Mopa Dean from Armed and Hamered singing Gino at one of there gigs..oh about 25 yrs ago at Lee's...{I think}
Cheers