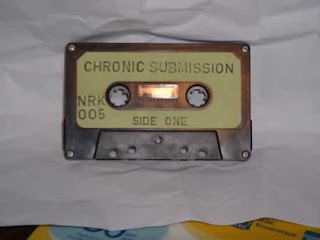 I haven’t been around for a while, but I never forgot Thoughtcrime. And to prove my coolness, I bring forth a special treat of moon jumping proportions: both of Chronic Submission’s tapes. This criminally underrated band from Toronto tore it up with great licks and wicked tempos and before you say their faster songs rip off Jerry’s Kids, kindly note that both the Boston thrashers' Is This My World? and Sick of Reality came out in the same year. So there.

These tapes showcase a great band in fine form. There's even a punk rock medley for your listening pleasure. How cool is that? In fact, Chronic Submission is so good they will have you jumping for the moon in no time.

See you up there! 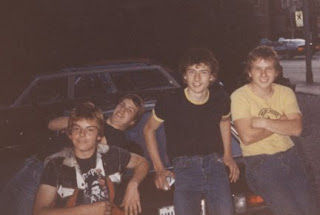 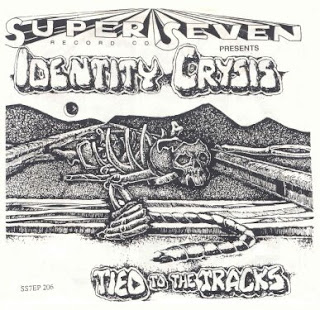 Identity Crysis were a hard hitting hardcore band from Sacramento and as far as I know, Tied To The Tracks was their only release. ‘Tis a shame because this record rips. Released on Mystic Records, Identity Cryisis shred their way though six songs like they were paying for the recording by the second. So strap yourself in and enjoy the ride, because Tied To The Tracks will send you on a punk rock rollercoaster that will makes you gasp for more.

Go to the LOSERLIST69 Blog for a cool interview. It is also where I lifted the image. 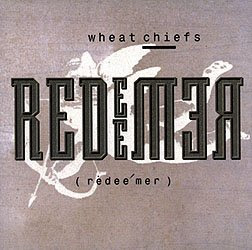 Ship of Fools formed in the wake of SNFU’s demise in 1988. Consisting of three members of SNFU, including the guitar playing Belke brothers, they ended up changing their name to Wheat Chiefs and they released a short cassette in 1990, I think.

Wheat Chiefs had to put up with lots of shit. Lots of people expected a reincarnation of SNFU, just without Chi Pig singing, and were not happy when what they got instead was melodic alternative rock. They were plenty of "Play some SNFU!" shouts from unhappy punkers at their early shows. At the band’s beginning the difference between SNFU’s brand of hardcore and Wheat Chiefs’ toned down punk could not have been more striking, but people came around to them. I even understood that as much as I wanted them to play songs that they wrote when they were teens, it sometimes isn't feasible.

The thing is that the Wheat Chiefs did it right. On Redeemer, they took punk to a different level, concentrating more on well crafted songs than on just playing fast and loud. That's not to say that SNFU didn't have well crafted songs; it's just that the songs on Redeemer are more refined and mellower. The punk attitude is still there, but some of the fury has taken a hike.

Don't worry though, there's still plenty of attitude against suburban dweebs in "Neighbors" ('I would die if I were like you') and spoiled hockey players like the subject of "Joe Murphy". Wheat Chiefs actually make that song's refrain of "Say goodbye, I will say goodbye" seem to mean more than just an indictment against a kooky hockey player who thought he was a god and should be paid accordingly. They make it mournful, as if you should be listening to it after you left your fiancee at the train station before going to war.

I borrowed the image from dropd.com

Download it here: Wheat Chiefs
Posted by AdamBomb at 10:40 AM 2 comments: 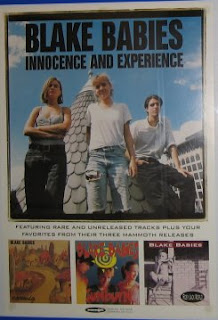 A compilation of unreleased songs and hits from previous efforts, Innocence and Experience serves as a kind of greatest hits collection. I don’t know how much of an endorsement this is, but my kids really like it. Mind you, they like every bit of music I subject them to, but it seems they especially like Blake Babies. My daughter always asks in a sweet and thin voice oddly reminiscent of Juliana Hatfield, "Where is the girl singer?"

Blake Babies were Juliana Hatfield’s band, where she played seemingly simple bass lines that upon closer inspection were as intricate as arabesques. The music is indie, for a lack of better term. Unfortunately I never heard of The Blake Babies until my friend told me to check them out. "Very well written songs, man" was about what he told me. This was about eight years after we saw Juliana Hatfield live, the bastard. He could’ve told me sooner.

As for their name, the story goes they got their name from Allen Ginsberg when they asked him to name their band and as far as lyrics go, they are worthy of the Howl man himself. I don’t know if an indie band had ever evoked such heartache and caustic regret with such skill before. Check these lyrics out from "Star": "You ring me up and you bring me down/I never know if you'll come around/I like the salty taste in my mouth/Ten minutes on the lips, ten days without" or "Cesspool": "They took it away, they're not gonna put it back/They think they've got me in a trap/But there's one thing I'm prepared to do/To make this cesspool as good as new/I'll get my guns and both of my friends/We'll make some righteous amends...maybe we'll start a trend." Fuck yeah.

I got the image here: cheapandplastic.com 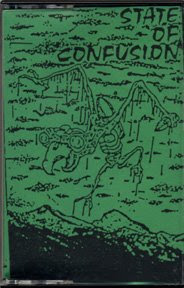 State of Confusion hailed from Idaho, home of tasty potatoes and birthplace of Pushead. The only time I’ve ever been there was for about an hour as my friends and I drove through it in the middle of the night. I don’t know if I missed much or not.

6.3 Million Acres is killer. Aggressive, insightful hardcore is the name of their game and they pull it off better than most. Tight rhythms, angry sounds and fast guitar make State of Confusion fucking rock.

Then there are the lyrics. “Do you feel safe? You’re so fucking safe” the singer snidely screams in “Feel Safe” a decade before things like gated communities became the fashionable thing to do. If I may, I'd like to go on a tangent for a second. On the same trip when I went through Idaho, I spent a day or two in a small town in Oregon. This town, in supposedly liberal Oregon, had a gated community. I was like “What the fuck do you have to hide from? Rampaging beavers? Whatever.” Now it seems like every shit town and city in North America has at least one gated community. Even Idaho, not that I'd know.

The image was scammed from http://www.killfromtheheart.com/

Download it here: State of Confusion
Posted by AdamBomb at 10:37 AM 2 comments: