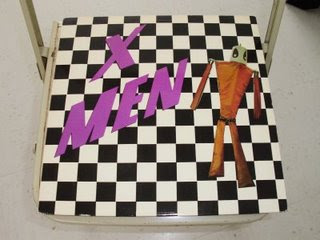 I have to admit that I was scared. For my birthday, my sister bought me a 1988 record off eBay by a band called the X-Men and the prospect petrified me a bit. I worried that the X in question connoted some straight edge affiliation. Not that I don't like straight edge hardcore; it's just I've had my fill lately. Too much generic straight edge music makes me want to drink and I haven't had a drop for years. Then I remembered the label that released it was Adrenalin O.D.'s Buy Our Records and as far as I knew, AOD had little to do with straight edge.

I also had to struggle with an inner geek who was stoked to find a band named X-Men. A melding of hardcore and comics seemed like such a rad thing to my little nerd. "What if they dressed like the uncanny X-Men when they played and had stage names like Wolverine and Nightcrawler and Kitty Pryde sang for them? How cool would that be?" The cover only served to stoke his imagination.
When I finally got th 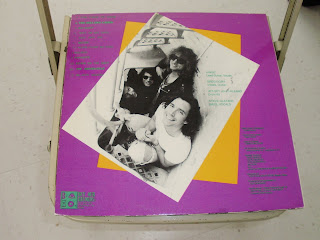 e record, the back photo scared me more than anything else because a couple of X-Men looked like they could've been in Def Leppard. I was sure that this record would be the worst hardcore record ever with generic straight edge lameness sung by comic geeks who wanted to sound like Warrant. Great.
Turns out I was way wrong. What the X-Men deliver is solid mid-tempo hardcore with decent playing and singing. They're catchy and totally undeserving of my paranoia.
1. This thing of ours
2. The ball and chain
3. Kid blast
4. Not in my eyes
5. Fall into you
6. Exiled
7. I never close my eyes
8. Red box
9. Parasite
10. Down on the grip
11. The underworld
12. Black widow
Download it now: X-Men
Posted by AdamBomb at 11:21 AM