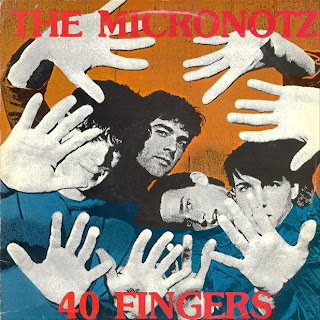 It's been a while. That might have something to do with the fact that I'm in South Africa right now. Cheap excuse, what with technology being the way it is and all, but it's all I got when it comes to this here blog.

So I thought in honour of my last post, I'll continue the college rock theme with The Micronotz. Not only were they named after a cool comic based on a toy line I remember reading when I was younger, The Micronotz also rocked hard. They were from Kansas and apparently played out lots. "40 Fingers" is a definite departure from their earlier stuff, due to having a new singer and perhaps being better able to play their instruments. They also seemed to have listened a lot to Husker Du, because the influence is all over the record. As the Flex discography says, "More Minnesota hardcore, melodic, melancholic, rough vocals." Yep, and to top it all off, the Simon and Garfunkel cover doesn't even suck.

The image is from Mental Excursions

Last Days of Man on Earth has more info on The Micronotz and their Smash ep to boot:

Dressed for the H Bomb has yet more Micronotz info and the 1984's Live Recording of the Video Soundtrack:

Two live recordings of the Micronotz can be found at Mr. Fink, along with even more info: