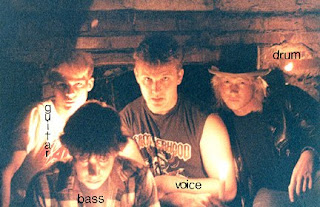 South Carolina’s Fear Itself played killer thrash. In the punk rock family tree, they’d be the bastard child of The Misfits, who’d supply the lyrics, and Attitude Adjustment, who’d donate the music. Like Maximum Rock And Roll said when the demo first came out, it could be called ‘Horror Thrash’, for a lack of better terms. So rock out and then watch horror movies. Or the other way around.

The pic is from Kill From The Heart

Posted by AdamBomb at 2:26 PM No comments:

So, I just received an email from Bob at Sound Idea. It has some basic information about this great band. Rather than paraphrase what he said, I'll copy and paste instead. 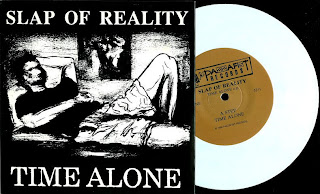 y.
SOR's best record was their first -- the Stuck Inside 7" on Vinyl Communications, 1989.
Thanks,
Bob
Brandon, FL

By the way, Sam Williams from Down By Law WAS in a reformed version of Slap Of Reality for about 3 weeks.
Joe from Slap OfReality and I are in Murder-Suicide Pact.

Thanks again, Bob. Sorry I couldn't find the image for the Stuck Inside 7", so the Time Alone one will have to do.
Posted by AdamBomb at 9:28 PM 1 comment: