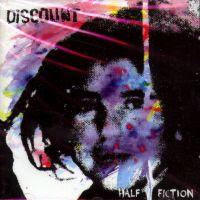 Discount was a punk band from Florida that started in 1995 and called it a day in 2000. The singer, Allison, went on to be half of the critical darlings The Kills. Other members joined Unitas and the post Hot Water Music outfit, The Draft.

It’s a shame that this record is out of print, as is their masterpiece, “Crash Diagnostic”, which I will post some day. Both albums are awesome and showcase the band’s natural growth from a very cool upstart punk (I refuse to use the term pop punk, as it’s been corrupted and I hate it) to a more mature punk sound.

High school sincerity is all over “Half Fiction”, no doubt due to them either being in high school or just out of it. Don’t think that this record is sloppy though. The music is melodic and the lyrics ache with longing.

I can’t get enough of this album lately. It’s all I listen to and its vibrancy and yearning remind me why music is exciting in the first place. I highly recommend you give it a listen. 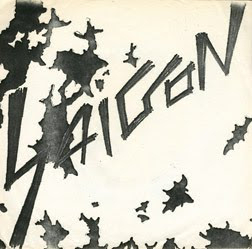 Oh, to be a kid in the early eighties, where you were surrounded by a whole bunch of losers and if you were of the few who saw through the bullshit facade of what the world was trying to shove down your throat you probably picked up a skateboard or started a band, or both, which is what Saigon’s members did and as sad as this, the only difference now is that the president isn’t a former governor of California. Lame, but screw it; go pick up a skateboard, or start a band, or do both and fuck shit up.

Image is from Kill From The Heart

3 played some good post hardcore. What the hell is that you ask? According to Wikipedia, it is a “term for a broad constellation of groups who emerged from the hardcore punk scene, or took inspiration from hardcore, while concerning themselves with a wider palette of expression, closer to experimental rock.” And 3 totally delivers on the wider palette of expression part. Just check out the classical guitar riff on “Swann Street” to see what I mean.

This is incredible music, with a very poppy edge that is, for a lack of better words, friendly. They are like old friends who are there to provide sonic comfort. Flex says 3 lies between Revolution Summer type of tunes and early 7 Seconds. It that doesn’t sound like a good friend, then I don’t know what will. 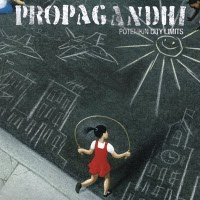 A friend told me about this video and I'm pretty happy he did. As it comes from such a great band I wanted to share them blasting out the lead song from their penultimate release. If you don't have it, do yourself a favour and get "Potemkin City Limits" now. Propagandhi are an incredible band and this record is simply why you listen to punk: it's intense, thought provoking and just to give the finger to those who say if you play hardcore, you can't play your instruments, it is incredibly progressive musically.

A new iron curtain drawn across the 49th parallel.
Cut all diplomatic ties as we expel all American dignitaries
And issue a nation-wide travel advisory for any others left inside.
Nowhere to run. Nowhere to hide.
The burned out shells of south-bound traffic lay strewn along a cold stretch of would-be interstate.
Still visible below their charred remains: Pax Americana plates.
Your stupid fucking laser-pucks™ were just the start.
And while you may stand six full cubits and a span, we got a shepherd’s sling and five stones in our hand
And the battle of 1812 lives in our hearts.
We don’t care if we’re destroyed.
We’ll never capitulate.
We’ll take the whole fucking world down with us in flames.
Just a speculative fiction. No cause for alarm.
We got a good 15 years left ‘til the United We Stand murals on West Broadway finally fade and we wave good-bye to such sad, childish refrains.
Replaced with other stupid lullabies like you can have my guns when you pry them from my cold dead hands.
Just a speculative fiction. No cause for alarm.


Wtach the video here: Propagandhi, A Speculative Fiction, Live, Edmonton 03/03/07
Posted by AdamBomb at 9:00 AM No comments: 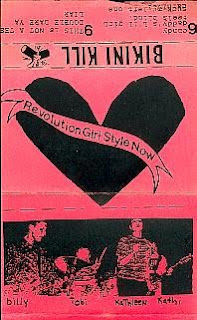 Those of who follow this here blog might have noticed that in addition to obscure hardcore and punk, I also like to indie/alt tuneage fronted by females. Usually, it’s a bit more laid back and more harmonic. Today though, I’m breaking the mould.Bikini Kill’s demo is definitely not laid back. They’re fucking pissed off and for good reason: society marginalizes girls and Bikini Kill won’t stand for it anymore. The music and lyrics unceremoniously scrape away the bullshit that covers our lives. This is raw and unfiltered and although the albums that followed were better, this is still a decent document of the beginning of a great band.I never understood why people didn’t like them. Oh right, it‘s because they’re girls(and one guy I might add) rocking out and not doing it half naked and they have something to say. I find it sad that not much has changed since this demo came out almost 20 years ago.The image is from Wikipedia