Here is a whole bunch of Chicago punk rawk by the Bhopal Stiffs. I believe that this is their whole discography. It’s has that classic Chicago sound embodied by Naked Raygun: melodic, tight and fast, though a big difference is that the Bhopal Stiffs have raspier vocals.

For me, the first and sixth songs make the band. If they only ever did these two tracks, it would’ve been more than enough. Both songs are so awesome, with their gravelly vocals, some good “whoa ahs” and compact playing. In fact, I rarely listen past “Too Many Things”, but don’t let that stop you.

From Kill From The Heart:

Download it now! Bhopal Stiffs
Posted by AdamBomb at 2:10 PM No comments:

Down By Law Reupped

You can get it here:

Down By Law
Posted by AdamBomb at 1:59 PM No comments: 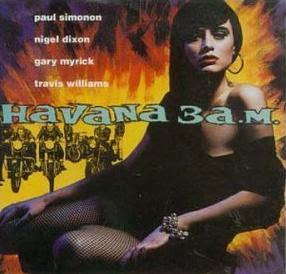 I’m always surprised that the self titled album by Havana 3 a.m. hasn’t received as much fanfare as it deserved. It’s a fantastic record with every track being worthy of your time. The fact that music critics would rather espouse the greatness of another album released that same year just goes to show you that music critics blow. Sure, “Nevermind” was good, but this record was also worthy of attention, along with many other released during 1991.

The fact that this record blows most of the records recorded by ex Clash members out of the water is not surprising. Big Audio Dynamite lived up to their initials and Joe Strummer did some regrettable solo work until he hooked up with The Mescaleros. Even Topper Headon did a solo record, which I never heard, but live in fear of.

If Havana 3 a.m. did receive attention, it was largely because Paul Simonon of The Clash played bass. That definitely is cool, but it ignores the Havana 3am’s worth as a band. As you can tell, I think they rocked. The album has what it takes to rule your stereo for a while: sincere lyrics sung to reggae infused rockabilly with Latin overtones. Oops, that sounded like music critic garbage; my apologies.

Image is from Wikipedia