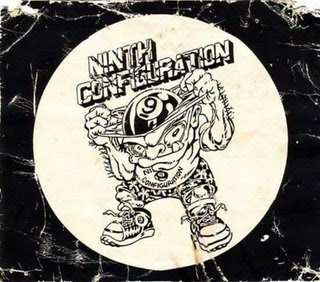 The first time I saw was NiCon was at a local dive in the spring of 1990. Like about half of the other people there I was underage (RIP Ambassador, AKA The Ambo, The Slambo, and whatever else rhymes with bow). I don’t remember who else played but I sure the hell remember Ninth Configuration. They owned the stage. That little slab of wood couldn’t cage them as the singer fiercely sang to music that had the power of an elephant gun. It was absolutely incredible.
Later, when I bought their tape Vegas, I was slightly disappointed. I was looking for hardcore but got something a little less aggressive. It took a while to grow on me, but once I got it, it made more sense than blackjack. Their first tape might’ve been more to my taste at the time, but I had no idea it even existed. Luckily my pal in Vancouver sent me a burned copy a few years ago and now we can all enjoy it. Together.

Download the second NiCon tape, "Vegas", from the Calgary Cassette Preservation Society:
http://calgarycassettes.blogspot.com/2008/03/ninth-configuration-vegas-1990.html
I got the image from Punk History Canada. Thanks to Golden Rock for having the eyes of an eagle and seeing the date for this tape's release.
1. Walkaway
2. Stalin’s A Vampire
3. Brune Hilda
4. Die For You
5. Blowin’ In The Wind
6. No Hope
7. In My Dreams
8. Say It Again
9. Party Girl / Corner Of The Room
Download it here: Ninth Configuration
Posted by AdamBomb at 6:16 PM

This is GOOD! Thanks for posting it!

Wow--thanks for digging that one up! There's an ad for the cassette at Punk History Canada (http://www.punkhistorycanada.ca/gallery/show.php?album_id=10&id=2443)...the print at the bottom is tiny, but looks like it says 1987.
Great blog!

I think the Ninth Configuration show you speak of featured Ship of Fools (who later changed names to the Wheat Chiefs) as the openers. I have the flyer at home still. I was 16 when i snuck into this show, and it was my 2nd time seeing them, the 1st being at show at the Multi Purpose Rumpus Room opening for SNFU.