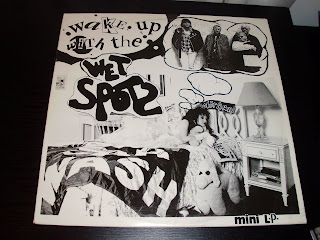 Produced by Mickey De Sadist from The Forgotten Rebels, this album leans toward the "rock" side of the punk rock equation. Some of the songs are goofy, like "Mashed Potatoes", which is really an Elvis cover, but others are a bit more serious. "Gotta Go" has an melancholic edge and "Stay 19", though not exactly somber, still has something to say.

Hailing from Hamilton, The Wet spots were also friends with Problem Children. No big surprise given the geography but they also shared a similar sound as well. Problem Children liked them so much that they released Wake Up With the Wet Spots on Problem Children Wrekords.

Thanks for the comment and good luck with the show!

I played guitar on this album and we had a lot of fun slapping it together. I can't believe it was 20 years ago.

Pat Havoc and I are still playing occasionally under the name the LeT dOwNs with former Problem Children bassist Barney Rebel and drummer Pete Second Best. We have been slowly putting together some original material and jut recently played the grand opening of the club "This Aint Hollywood" in Hamilton.

I still have the artwork for "Rusty Zippers', the great unrealesed album that never was. Let me know if you wanna pay me for it anytime soon. Seriously, Long live those crazy days! I'll always be a huge fan. It really is hard to believe it was that long ago...I guess even Hamilton punks have to get old sometime.Z.I.P. R.I.P.!!!

Guess who got stuck cleaning all the bottles off the roof...

Thanks for this! The Wet Spots were a great band - saw them open for the Rebels many times. Great memories!