The Detonators: Thousand Points of Punk (1991) 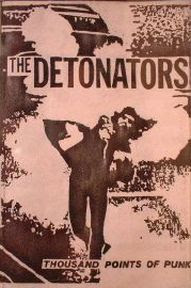 I first saw The Detonators in April, 1991, and I remember them being punk as fuck. They were so punk that they wore chains for guitar straps. I was mass impressed by that.

And they were old too. OK, more like what I thought of as old at the time, which was anyone over 21 but still here were these bona fide old fogies (who were probably in their late twenties, early thirties) playing ferocious hardcore and it was cool. They also rocked harder and played louder and much longer than kids younger than them. We simply couldn’t keep up. Old school indeed.

(image from Kill From The Heart)

Get it here (now zipped!)

(I finally figured out how to do a link. Gnarly.)
Posted by AdamBomb at 6:23 PM

Hi there, it's a fine blog and I was looking forward to downloading this album after how you described. Is there any way of zipping it up and uploading the albums that way? It's a massive pain in the arse having to do each individual track.

Sorry, I had no idea. I'll zip everything right away.