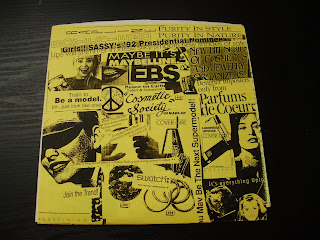 This shit is angry. E.B.S. play hardcore played along the lines of Poison Idea: spat vocals, raging guitar and a rhythm section that keeps it on the straight and narrow. It's a bit overwhelming, but in a good, kick in the ass sort of way.

There's always lots of stuff to be pissed about and E.B.S. knows it as well as anyone. They rage against cops, a superficial society and my favorite, The New Kids On The Block. Check out these lyrics from "Service Charge":

All screamed in about two seconds. Awesome!


Side One:
police pricks / my job sucks / draft the new kids / service charge

They released several records for our pleasure.

Great idea to post this classic hardcore from FLORIDA.

Thanks! I wonder if it's Florida's heat, humidity and senior citizens that made them so angry.