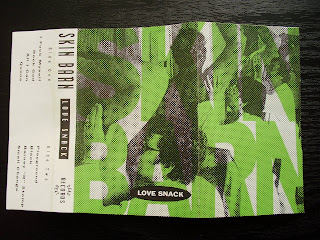 Speaking of slap happy bass players, Skin Barn is another example of this trend in punk rock circles in the early 90s, though this guy doesn’t get as funky as the guy from The Peoples Court. Skin Barn were from Calgary and were very popular until they broke up. I can only remember seeing them once, but I’m convinced I saw them more. The only things I recall from that show was that they were very cool and they sold these cool shirts that said "I Fucked Skin Barn" on the back. I really wanted one (actually still do) but didn’t have any coin.

All of the songs from the demo are very good, except the last one which I did not transfer from the tape. Some songs had a funky touch, others leaned toward the rock side. Vocal harmonies abound, as all three members could hold a note.

I don’t know much else about the band, besides them opening for Nirvana on March 4, 1991. There’s no date on the tape, but a friend told me he thought it came out in said mystical year.

Hey, thanks for posting this. I've got a blog that's cataloguing cassette releases from Calgary bands, I'll link into this. And I'll be putting up another Skin Barn tape shortly.