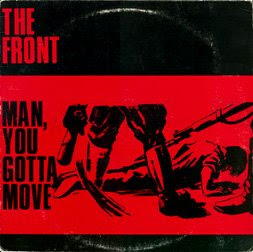 This summer I noticed that I had some extra money and the question became how I could justify blowing it. It just so happened I had some records that I never listen to due to the sad absence of a turntable. Hmmm...

Not wanting to be entirely stuck in the last century I wanted a record player with a modern twist. That is instead of taping to antiquated cassettes, I'd burn direct to CD. Ah, "How modern!" I said triumphantly. That it was modern eight years ago and that everything now is digital is beside the point. I'm always behind in things like this, so no matter.

The first record I burned, I think, was The Front's Man, You Gotta Move. Regardless, I bought the record with the intention of burning it instead of letting it collect dust. There are lots of things to like about it. Flex says, "Punk from California; melodic West Coast sound meets early The Clash - the singer sounds amazingly like the young Joe Strummer." What more could you want? Plus, the album's graphics remind me Republican Spain's posters encouraging the population to resist tyranny. It must be the red and black.

(image from Kill From The Heart)

1. Words From the Poster
2. Living in Fear
3. Production Lines
4. End of the Trail
5. Distant Guns
6. Something Else
7. Campaign Train
8. Liberty Sells