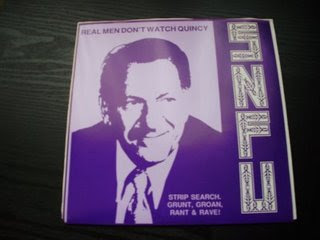 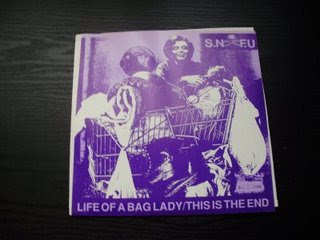 SNFU were local boys who'd done good. Without major radio play, they had sold something like 100 000 copies of their three great records and toured immeasurably by the time they broke up in 1989 (they reformed in the early 90s and put out the really cool The One Voted Most Likely To Succeed in 1995). For my friends and I, they ruled and they showed that even people from our loser town could do well. Sadly we had no idea this boot came out when it did because we’d have gotten our grubby hands on it.

The first side comes from their tracks taken from the 1983 comp It Came From Inner Space. This comp was hailed by Maximum Rocknroll for displaying a diverse range of local bands. The Quincy song attacks the crappy treatment given to punks on the lame 1980s TV show and "Grunt, Groan, Rant and Rave" would be redone to death on The Last of the Big Time Suspenders. As a side note, the comp also featured hardcore act Down Syndrome, who released a 7" in 1986 before forming minor cock rock sensations Big House. I took bass lessons in the Big House and remember it fondly. But I digress.

The other two tracks seem to be from around 1983 as well. I think "Life As A Bag Lady" was one of their first songs and "This Is The End" was recorded later as the finishing track on 1984’s And No One Else Wanted To Play. These tracks are cool in that they were the starting point for a great band and they still stand up; at least in my opinion they do. Plus, I still think society’s NFU and that’s cool to me too.