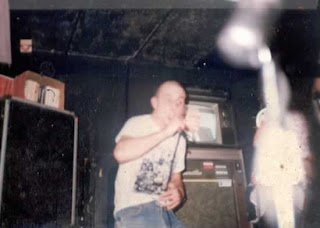 More Stupid Initials were a hardcore band from Toronto. They formed from the ashes of punk rock group DOG (Death of Gods), another abbreviated name, which might explain their name. Truth be told, punk bands have a thing for initials: MDC, SNFU, DOA, etc. It must be a part of the punk rock code: thou shalt play at least once in a band with initials. But I digress.

An Amazing Feat was their second release, having put out More Stupid Initials in 1986.

By the way, if you want some rad tunes, download the Death of Gods record at the True Punk and Metal blog: DOG

Punk History Canada has a brief little history here. Tis also where I got the image.

Download it now! An Amazing Feat
Posted by AdamBomb at 11:41 AM

Certainly An Amazing Feat was their second release, having put out More Stupid Initials in 1986.