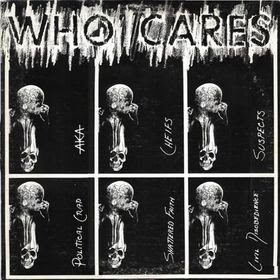 Killer early 80s comp from southern California. Lots of this is beach punk and a nice companion piece to Posh Boys’ “Beach Blvd” compilation from 1979. All of the bands are solid, but one stands heads and shoulders above the rest, and that is Political Crap.

This was professional skater Duane Peters’ first band and Political Crap deliver some of punk’s finest moments with these three songs. The music is beach punk like the rest of the comp, but the difference is that Political Crap is much more aggressive. There is so crossover appeal for surfers. This is raw punk.

The Master of Disaster’s lyrics deal with teenage angst, dread, and anxiety about growing up. What makes them is so authentic is that they were, of course, the product of a teenager. All three songs rule, but for me, “Slow Death” is one of the best moments in music history. Never before has raw despair been recorded as convincingly as Peters rails against the future that society has in store for him. When I listen to it, it reminds me to do all I can to avoid the slow death. To think a song recorded by teens nearly 30 years ago can do that is just fucking rad.

Thanks so much! Haven't heard these bands so can't wait to check them out.

I had this album in the 80's and have been looking for it for a long time. It's a great compilation. Thanks

this is great, one of the first hardcore tapes i had (never had the actual lp). the local bands were the best. thanks for putting this up.