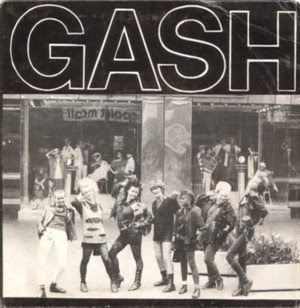 Three girls and one dude from Australia deliver some killer punk. The music screams contempt at a sick society and to think they succeeded against who knows how many sexist barriers makes you admire their drive and courage. Hell, even now in supposedly liberal countries like Canada they would be an anomaly and face many gender based obstacles and music critics would only blabber about their femaleness, forgetting how good their music is.

So, I’ll spare you all the clichés about female bands who rock hard, trite things like “If you think they can’t hold their own with the boys, think again”, or presumptuous things like, “They must be lesbians,” or downright insulting things like “people only like them because they’re girls.” Whatever.

The fact of the matter is that G.A.S.H. is awesome and holds it own with any record released by any band. Gash’s hardcore is played fast and mean. The vocals are nice and ferocious and the music is as powerful as a Mack truck. Every song packs a punch, with “Because You Are A Woman” stands out for its angry pace and snarled vocals. The whole record is like that and is a real shot in the face. Words like awesome don't even come close to describing how good Gash is.

Download it here: Gash
Posted by AdamBomb at 8:55 AM

Fuck!, I love this shit band! Thanks a lot bro!

Hey Adam, i've posted the funeral oration 1st demo in my blog, if you like, check it out ;)