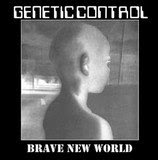 I got this CD as a freebie when I ordered the S.C.U.M. Born Too Soon reissue from Sonik's Chicken Shrimp Records. From what I gather, it’s long out of print. That’s a shame, since this CD includes Genetic Control’s 7”, which is one mighty slab o’ wax. When I first heard First Impressions, I just about jumped out of my dumpster dived chair and slammed danced with my empty bottles of liquor.

The version of First Impressions I have has a different song order than this CD. That’s because I have a CD reissue and on Brave New World, the song order stays true to the original 7” release. 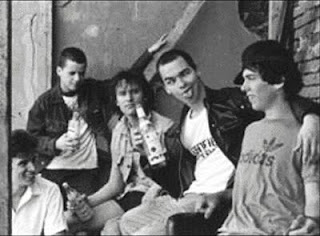 It is said that good things come in threes, and the three leading songs of the first CD reissue, consisting of “Suburban Life”, “Urban Cowboy” and “1984” prove that cliché to a T. They are three of the most urgent, sarcastically snotty and angry songs placed beside each other. “Suburban Life” pokes fun at the myth of suburban happiness; “Urban Cowboy” is a shot at those losers who think they’re John Wayne and like to pick fights with anyone who looks different; while “1984” chastises complacency as Big Brother takes over our lives. Taken together, they are as good as anything out there. To be honest, these three songs are so good that I never listen to the rest of the EP. I’m too spent picking up glass from broken bottles and fixing my chair. Enjoy.
Genetic Control's My Space page:
http://www.myspace.com/geneticcontrol1
Punk History Canada has a band bio and an image.
Lyrics for EP:

26. The End
Download it right here: Genetic Control
Posted by AdamBomb at 8:50 AM

Wow, i didn't even know this stuff existed on CD. Thanks for this, and the Zero Boys tape. I don't know how i missed this before.