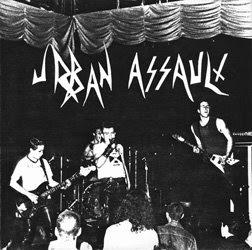 Urban Assault, the name that was so cool to early eighties hardcore folks that two bands (two!) took it as their moniker; one from San Francisco and the other from Reno. The Reno one put out a demo and was on a few comps as well. Their problem, to paraphrase an old review of a Reno comp, was that they suffered from the typical Skeeno problems of poor production.
This is the San Francisco Urban Assault. The production was dismissed by Flex as being weak, but whatever. This rules, and is worth a listen just for "Join The Army" alone. This song represents punk rock alienation to a T, with the attitude to boot. Check these lyrics out:
Be a cop, patrol the street, busting heads and kicking ass
Go to church, be real neat, say your prayers and go to mass
(Chorus)
Because they’re all stupid fools
They’re all wasting their time trying to be so fucking cool
Because they’re all stupid fools
And they can all go to hell
Definitely the shining moment of the record.
Oh, there was an Urban Assault from Johannesburg, South Africa as well. What is it about this name?
Image is from Kill From The Heart
1. Urban Assault
2. Shock Value
3. Join the Army
4. Product of Society

Download it here: Urban Assault
Posted by AdamBomb at 9:31 AM