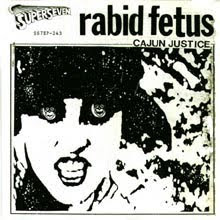 I know that it’s totally taken me ages since my last blog. My apologies for that; I’ve had internet issues along with Mediafire trouble. It’s been slightly infuriating, but whatever, it’s a new year full of fun possibilities, so let’s rock.

My first post of 2011 is courtesy Rabid Fetus and their release, ‘Cajun Justice’. Each song is a testament to how hardcore was alive and well at the end of 1980s, contrary to what has been argued by many. For example, in the book American Hardcore, Steven Blush arrogantly proclaims hardcore to have died in 1986. Oh, the clinical finality if it all. Incidentally, he also says that the few girls involved in the scene were mostly 'hags' and apart from D.O.A., bands from Canada made little impact on the American scene (can anyone open their mouth and say SNFU?). At least the book has a decent discography.

It’s a good thing my friends and I didn’t know that, along with countless others. We would’ve felt silly being punk rock anachronisms. I really dislike it when people do and say what Blush does. In the movie of the same name, the sentiment is repeated by various folks who condescendingly act if they own the title, basically saying, ‘If you weren’t there, you can never be like us.’ How very inclusive and punk.

Regardless, records by bands like Rabid Fetus demonstrate that punk was alive and well then and from what I can see, it still is thriving. Right on and keep it up is I what I say to that. ‘Cajun Justice’, as far as I know, was Rabid Fetus’ only release and one of Mystic Record’s last releases to boot. It’s also out of print. For those interested, there is a Facebook group as well.

Download it now! Rabid Fetus
Posted by AdamBomb at 2:10 AM

Thanks for the blog! My brother was the lead singer for Rabid Fetus and their brand of hardcore was most definitely alive and well into the early 90's. All the members hail from our hometown of Lindsborg, Kansas...yes, Kansas. This blog brings back great memories of great times. Rabid Fetus has one song available on iTunes and in addition to "Cajun Justice" they have a "demo" tape that was recorded in Dallas in the late 80's as well. You may contact them via Facebook if you have interest. Thanks again, you've made my day.
Sincerely,
Michael S. Mogenson, Esq.

Thank you so much for the comment and the heads up on the demo. It is totally appreciated.