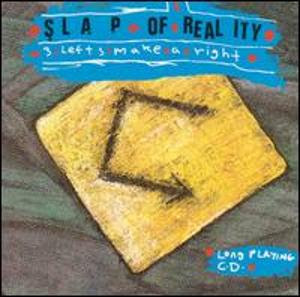 I got this album on outofprintpunk.blogspot.com. Good thing I got this before it became an invite only blog, because “3 Lefts Make A Right” rules.

Hailing from Tampa Bay, Slap Of Reality rocked hard in the late eighties and early nineties. Their sound resembles the melodic punk of the day, in that it has harmony and isn’t too fast, but still has punk’s intensity. Oh, and they could play their instruments. The singer is earnest and the guitarist, who I think went on to play with Down By Law a few years later, is slick. The rhythm section, though, steals the show. They are tight and talented, with the drummer pulling all kinds of fills and the bass player uses the whole fretboard. The bass dude also plays his own lines and doesn’t just follow what the guitarist does. I could tell listening to him that as a former punk rock bass playing kind of person myself I’d have been depressed had I listened to Slap Of Reality back when I played because there is no way I’d ever have been able replicate what he does.
As you can tell, I really dig this album. To me and I know it's a bit repetitive to say this about any late eighties/early nineties melodic band, but whatever, they sound like the Doughboys, but dare I say it, they're better. Yep, much better. Enjoy the rad sounds of Slap Of Reality.
1. As Far As You Know
2. Certain Fall
3. Time Alone
4. Radiate
5. Different Worlds
6. Five
7. Where's It Going
8. Best of Me
9. Walk Away
10. Just What I Needed
Download it now! Slap Of Reality
Posted by AdamBomb at 2:02 PM

Thanks man, I loved this record!!! How does one go abou getting an invite to outofprintpunk.blogspot.com?

No problem. I'm glad you like it. Sadly, I have no idea on how to get an invite to that blog, which sucks because it is awesome. I'll post some other stuff I got off him later, like Krupted Peasant Farmerz.

Awesome. I have a KPF video from when they played in Calgary.

This is Joe Kiser, from Slap of Reality. Wow, thanks for the love man. Better than the Doughboys? I am honored :). Frank Lacatena (vox) and I are still playing together actually, in a band called The Sophomore Effort. You can check out some tunes if you like at:
myspace.com/thesophomoreeffort

As the dork that sang on that record I appreciate the positive review!

Thanks for leaving the comments, Slap of Reality alum :)

Brilliant! Man oh man, I had this CD stolen out of my car many, many years ago and could never find a digital copy. About every six months I remember to search again.
Every band/song takes you to a point in time in your life. For me, this record reminds me of working the graveyard shift at Denny's washing dishes. Played this record non-stop for at least a year.
Thanks for posting this! I'm a happy person right now, my neighbors, not so much.

I do an online radio show on Tuesdays, I'm so playing a track or two tonight!

thekcshow....glad that record meant something to you! We did a "reunion" album of sorts in the mid 90's called "Monkeydust". I will post a digital copy of that record soon

Please do, I'd love to hear it. Am diggin' the new stylings, played it last week, and got a great response.

I went to school with the talented bass player, John Ramos. I wasn't fully into the punk scene but I bought this album and listened to it relentlessly. It takes me back to the summer I was working in the game department at Busch Gardens-Tampa.

I popped it in tonight because my Slacker channel played The Cars "Just What I Needed". I thought, if I'm going to listen to this song, I might as well listen to it properly.