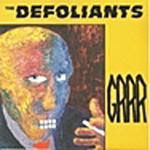 What I find interesting is the surf influence on "Grrr". When they incorporate surf stylings in their songs, they sound almost like a heavier Agent Orange. I know it’s pretty lame to compare them to the godfathers of surf punk, but in this instance it works.

On a completely unrelated note, I really like the album title and cover. The title is cool because it actually reflects a lot the record's mood and the cover compliments the title rather well. It gets the title across rather well me thinks.

“Steakhouse”, the first song, is a total winner with its catchy chorus of “This is my steakhouse” and gnarly guitar. "Bad Day At The Beach" will burrow its way into your head and make itself quite comfortable there. The instrumentals are also rad with their brooding guitar work.

Come to think of it, you can't go wrong with any band that makes you think of Agent Orange.

Image is from discogs.com

I loved seeing these guys when I lived in Chicago. Nice bunch of guys.

Hey! Can you please reupload this file? I heard the hang ten 7 inch and it was way dope. Id love to hear this one!
Thank you kindly